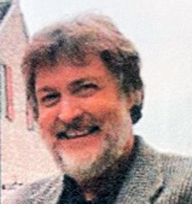 From his days as a champion drag car racer in the 60’s and 70’s to his work in construction to his mechanic work to his most be world renowned artist, Lewis was all about fun. Always he was smiling, laughing and joking with whomever he came in contact, brightening their worlds as he touched their lives.

With his pet dogs Lewis walked the town spreading cheer as he went. When he lost his baby Zeus in 2020 he continued on his walking path and wherever he went with Zeus’ remains accompanying him. Then he sat on the benches downtown feeding dog biscuits to passers by, making friends with new dogs all the time.

Lewis’ religion was central to his life. When he wasn’t gallivanting around town, he was in Church or in the adoration chapel participating in Mass, Divine Mercy, Divine Mercy Sunday, and in his own holy hours. A person of great religious convictions, Lewis placed his holy obligations as the number one priority in his life. Even toward the end of his life when he became so frail and weak, you could find him attending Mass every Sunday. A champion in so many areas of his life, Lewis remained so up until his death. Even cancer couldn’t get the best of Lewis as he maintained a positive attitude and sense of humor throughout the depths of serious illness and affliction. Carried through by his deep faith and devotion, Lewis met death like a Chevy at the starting line, strong and ready to go.