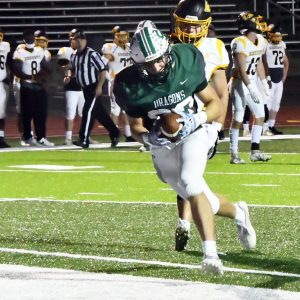 The Ste. Genevieve High School football team wasn’t flat this past Friday in another stern test against a regional powerhouse, this time in the form of Kennett.

However, Kennett used ball control during the final couple minutes of the fourth quarter — leaving Ste. Genevieve only enough time for a miracle punt return.

The Dragons were stopped inside their own territory on the return, the clock showed three zeros, and Kennett escaped with a 40-38 victory.

In short time, Ste. Genevieve has become a much more competitive force, save for the clunker against cross-town rival Valle Catholic.

“The players battled the entire night, and gave relentless effort on every snap,” Pope said. “As a staff, we were extremely proud of the product the athletes put on the field.”

Pope said every play mattered versus Kennett, and the Dragons were able to pile on 38 points thanks to offensive coordinator Kellen Basler’s game plan.

“Coach (Kellen) Basler, and the offensive coaches, did a fantastic job game planning and working together to come up with some ways to use Kennett’s aggressiveness against them,” Pope noted.

The Dragons took advantage of an undisciplined group of Indians, which included a coach ejection in the second half.