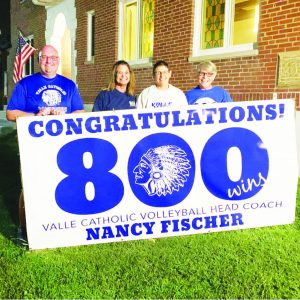 This past week was a special one for Valle Catholic head volleyball coach Nancy Fischer.

The longtime coach of the Warriors, dating back to the mid-1980s, earned her 800th victory in a five-set thriller over Jefferson R-7 last Thursday in Festus.

“It was a heck of a game,” Fischer said via text message to the Herald after last Thursday’s milestone achievement.

“After being a little off our game the first two sets, the girls really found their groove and dominated the rest of the way,” Fischer added.

Fischer, after completion of the Southeast Missouri Dig For Life benefit tournament in Cape Girardeau, now stands at 803 wins.

Currently, she ranks third all-time in the Show-Me State in victories — behind only Herman’s Linda Lampkin (937) and Lori Hanaway, who has coached a slew of teams from the Lee’s Summit area near Kansas City.

After the Dig For Life Tournament this past weekend, Fischer’s tote board now stands at 803 wins.

Warrior had T-shirts printed with “800 wins” on them. There was a small Homecoming when Fischer and the team returned to Ste. Genevieve that night.

Ella Bertram and Makayla Joggerst began controlling the net in the fourth and fifth sets, according to eyewitness accounts. Bertram pounded down 18 kills to go with nine ace block assists and Joggerst 11.

Callee Naeger and Joggerst both chipped in with three ace block assists apiece.

Loida also paced the Warriors with 40 assists while liberos Rachel Blum and Mia Weiler had 16 and 14 digs, respectively. Blum and Joggerst were tops in serve receptions with 19.

Fischer was very pleased with the Warriors’ performance this past weekend at the Dig For Life Tournament.

“I guess the bottom line is that we ended up tied for third place out of close to 60 teams that participated in the tournament,” the coach commented.