All-state player Sam Drury was injured during the first quarter, and the Warriors struggled — until their offense picked up as the game crept toward halftime.

In the end, Valle Catholic earned yet another ho-hum 56-14 victory over St. Vincent in this one-sided series. 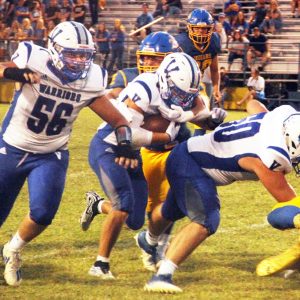 “The injury to Sam took the wind out of our sails a little bit,” Naeger noted. “Our guys care a lot for each other, and it was certainly tough to put that behind us, and just play.”

Naeger said the Warriors will miss Drury’s leadership and athleticism.

“We will have to see who steps up and tries to fill in for him,” Naeger added. “We have a lot of good athletes.”

Valle Catholic this season has been more effective on the ground than through the air — and the Warriors chewed up 576 yards in this fleecing of St. Vincent.

So far this season, an ever-improving offensive line has paved the way for 1,478 yards in three games — an astonishing figure. Some scholastic teams don’t rush for that many yards in a season.