They expressed pleasure in how the Saline Creek project turned out. The transition from chip and seal to asphalt at the bottom of the hill was largely seamless and the paving was smooth.

They also swung by Progress Parkway, where Might Light Cement Finishing was working on the crosswalk and steps project. 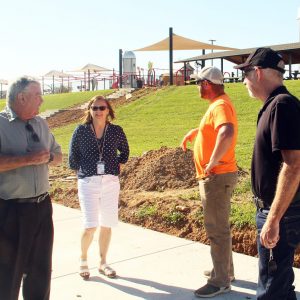 The long-planned project, which for a time was going to feature an elevated walkway with elevator, would up being a crosswalk across Progress, tying the Ste. Genevieve County Community Center, Progress Sports Complex and other entities on the southwest side of the street with the new River Rapids Waterpark on the northeast side.

The steps are nearly done.

The cost of a pipe that will go under the street was also discussed both during the meeting and with personnel on the site. The drainage pipe that will run down hill to a junction box was priced at $16,500. Just over $10,000 was for the pipe itself, which the commissioners thought was excessive.

It was also noted that there was no word on Truck 7, a 2011 Freightliner, that was  being worked on in Wentzville.

Schmieder will call and check on the status of the newest dump truck, a Western Star truck that will get its bed and accessories added at Viking Cives in Morley.

Presiding Commissioner Garry Nelson repeated his desire to  have all three commissioners go down and tour the plant when the truck is picked up in Morley.

It was also noted that it would be about three to four weeks before Moore Fencing can replace the damaged fence between the county recycling center and Stuppy Auto and Wrecker Service.