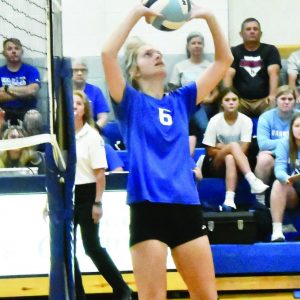 It was three up, three down for the Valle Catholic High School volleyball team last week.

Valle Catholic is racking up the wins as the squad heads toward this weekend’s gargantuan, 60-team Southeast Missouri Dig For Life Tournament at Cape Girardeau.

“We played good volleyball at times, and not so good at other times,” said Valle Catholic head coach Nancy Fischer. “We will need to become more consistent if we wish to be able to compete with the top teams in the area.”

This was a match featuring two teams that both reached the state tournament in Cape Girardeau last November.

Fischer said Central graduated a slew of players, and the Rebels also have a couple of key early-season injuries keeping them down.

“They are very young and inexperienced, but they are likely to improve significantly as the season progresses,” the coach commented.

It was a banner evening for senior, all-state middle blocker Ella Bertram, who controlled the net to the tune of 15 kills and two solo ace blocks.

Sam Loida earned 18 points off her serve, and she also recorded 28 assists as the Warriors played primarily a 5-1 attack.