The Valle Catholic defense forced four Ste. Genevieve turnovers, and the Warriors also cashed in on their red-zone chances in this 46-0 victory over their cross-town foes.

“(Forcing) Turnovers were a point of emphasis for us this season after last year,” Valle Catholic head coach Judd Naeger noted. “Coach (Adam) Gibbs has done a good job with the running backs and quarterbacks in practice working on ball security, and it has shown in games.” 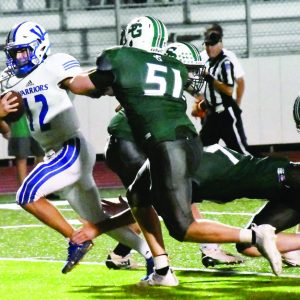 “Turnovers are a key category we track,” Pope said. “There is a direct correlation between maintaining possession and winning football games. When you are playing a really good opponent, you can’t afford to give them extra possessions.”

“If you look at Aiden’s two interceptions, they were both really good reads and throws,” Pope said. “The Valle secondary just made two incredible plays to take the ball away from us.”

Chase Fallert, who finished with 259 all-purpose yards (rushing and receiving) with four TD combined, cashed in on Warrior drives inside the red zone (from Ste. Genevieve’s 20-yard line and in).

Valle Catholic opened the scoring on a 34-yard TD strike from Fallert to Aiden Heberlie (116 receiving yards). Meanwhile the Warriors stopped the Dragons inside the 20-yard line, squandering a long gain from sophomore Wyatt Springkamper.

Giesler recovered a Ste. Genevieve on the Dragons’ next possession while they were driving again.

Meanwhile, Giesler (game-leading 133 yards rushing) and Fallert chewed up yard after yard — resulting in a 33-0 halftime lead for the Warriors. For the second straight week, Alex Viox punched in a second-half TD, adding to Valle Catholic’s points total.