On Aug. 16 of that year, the effect of the war reached Ste. Genevieve when Union troops seized the local bank’s money for safekeeping due to rebel activity in the area.  General John C. Fremont declared the state of Missouri under martial law on August 30, 1861.

Under martial law, administration of justice was transferred from civilian courts to the military. To implement martial law, provost marshals were assigned in each county. They had the power to conduct random arrests, provide passes for travel, issue assessment and taxes, banish people from the area, and require loyalty oaths from those suspected of aiding and abetting the southern forces. 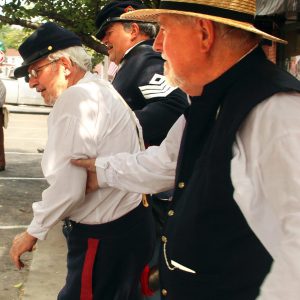 Local resident Augustus St. Gem was named as Provost Marshal of Ste. Genevieve County on Sept. 3, 1862. His brother, J. Felix St. James, one of the first area volunteers to the Union cause, had died earlier that year at the battle of Shiloh.

He also required oaths and bonds from citizens such as Felix Labruyere and William Pratt. St. Gem was later promoted to provost marshal for the counties of Perry and Jefferson in addition to Ste. Genevieve. He served in that capacity until April 8, 1865, when he was succeeded by Lt. John O’Neil.

The Aug. 28 event on Third Street was a reenactment of various events that happened in Ste. Genevieve during the Civil War.

Some of the characters in the reenactment portrayed actual Civil War characters. Others unnamed soldiers and citizens.