Griffard raced in with a third-place finish in the girls’ ninth-grade race, which covered 1.95 miles, on Saturday at the season-opening Jackson Invitational in Jackson City Park.

The former St. Agnes athlete clocked in with a time of 13 minutes, 9.8 seconds.

Tenth- through 12th-grade runners traversed a slightly longer course at 2.35 miles. Race officials bumped up the competition one hour to help competitors beat the heat.

“You could really feel the difference by 9:30 a.m., when the senior girls had to run,” said Valle Catholic head coach Samer Zoughaib.

Competition was tough, with 29 schools from across Missouri and Illinois including Missouri Class 5 Jackson, Lindbergh, Poplar Bluff and Cape Central plus Illinois Class 6 Carbondale. 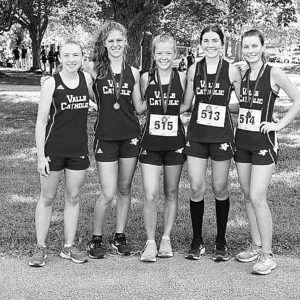 Zoughaib said the event served as a perfect warm-up for future races, including this Wednesday at the St. Vincent Invitational in Perryville’s Park Center.

“The meet will have nine teams, and it will be very competitive,” the coach commented. “It will be our first test of running a five-kilometer, especially for our new freshmen and Lexi (Ritter). It will also be our first chance to have all the kids run together, and key off each other as we do in practice every day.”

Top-25 runners received medals, and Valle Catholic was well-represented across the board.

Ste. Genevieve will not have a regular-season meet until Saturday, Sept. 11, at the Arcadia Valley Invitational in Ironton. Valle Catholic also will compete here.