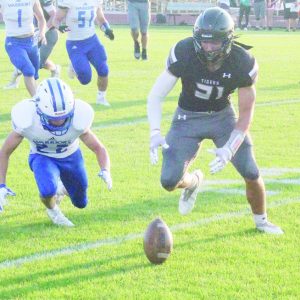 Valle Catholic adjusted quite nicely to the hot conditions. The Warriors left Ste. Genevieve at 10:30 a.m. in a charter bus, taking plenty of breaks along the way, allowing the players to stretch their legs and acclimate to the heat.

Valle Catholic scored five of its eight TD on single-play drives or a pick six — and the game was played used the state-mandated running-clock rule for most of the second half.

“The offensive line and ball carriers did a good job of turning good gains into great gains,” Valle Catholic head coach Judd Naeger said. “It was a complete team effort.”

The Warriors are 1-0 heading into the “Old Settlement Showdown” at Ste. Genevieve this Friday. Kickoff is set for 7 p.m.

Roth returned an interception 50 yards for a TD during the first quarter. Tucker was the Warriors’ leading defender with 13 tackle points (including five solo stops). Okenfuss was constantly in the Tigers’ backfield, a disruptive force with a quarterback sack and three tackles for negative yardage. Josh Bieser also recovered a fumble.