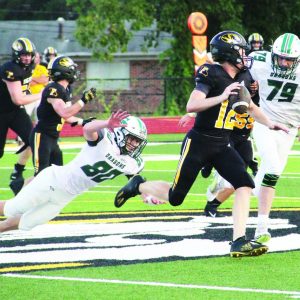 That gave the Dragons a 17-point lead, and Ste. Genevieve hung on to defeat Festus by a score of 36-31 at Tiger Stadium.

“For me, it was a feeling of relief,” Pope said. “A lot has been sacrificed by the players, parents and assistant coaches all summer long.

“I knew that having success in the first game, and proving those sacrifices lead to something enjoyable, was the most important aspect of rebuilding this program back to its traditional success,” Pope added.

The Dragons are 1-0 heading into this week’s “Old Settlement Showdown” versus Valle Catholic. Kickoff is set for 7 p.m. at Dragon Field.

Ste. Genevieve was able to win the game with a stellar pass rush, sending different styles of blitzes and pressures.

Festus quarterback Cole Rickerman was able to escape the pocket during the game; however, he wasn’t able to do it enough.

Thomas O’Brien keyed the defense with six tackles, including two for losses. Landen Thompson added three tackles for loss and one quarterback sack. Will Vaughn also had a tackle for loss.

“I think the offensive coaching staff did a tremendous job recognizing what Festus was doing and made game-in adjustments that provided the athletes the best opportunities to be successful.”