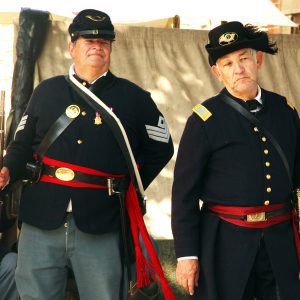 Members of the local Sons of Union Veterans of the Civil War (SUVCW) organization put on a reenactment of Ste. Genevieve’s Civil War experiences Saturday morning on third Street.

Like Hollywood historical movies, some latitude was taken, with the time line. Events that took place in 1862, 1864 and 1865 were all presented, to show the local Civil War experience in a flowing narrative.

They included the appointment of  Gustavus St. Gem (played by Bob Mueller) as provost marshal under martial law, in an attempt to keep southern sympathizers under control, federal troops taking over the courthouse (Oct. 1, 1864), General Order 13 barring the selling of liquor to the local militia (May 19, 1865) and the naming of prominent citizens as possible southern sympathizers (April 14, 1864).

Some of the characters in the reenactment portrayed actual Civil War characters. Others unnamed soldiers and citizens.

SUVCW members also demonstrated period weapons and other items for visitors and had Civil War souvenirs for sale.

A more detailed look at what locals went through during the divisive and deadly conflict will appear in next week’s Herald.