Klahs was the recipient of the 2021 Cardinal Rigali Service Award, which was created several years ago as an expression of recognition and appreciation for long-term employees.

In addition to serving as St. Agnes principal, she also teaches third grade.

“I feel humbled and realize it is a great honor, I didn’t expect it,” Klahs said in an email to the Ste. Genevieve Herald.

“I know that many have devotions or callings to their parish or Catholic school,” Klahs continued.

“I wouldn’t be able to do what I do without the support and help of the St. Agnes community.”

Klahs has been in education for the past 35 years, the past 15 at St. Agnes, a kindergarten through eighth-grade parochial school.

She has been involved in pretty much everything — but the kitchen sink. 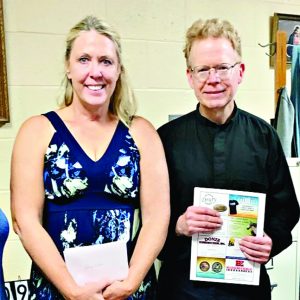 She has been a St. Louis Archdiocese Active Shooter Trainer, Bellarmine speech coach and judge, art club director and coached soccer, basketball and swimming. She’s even been a turn judge for swimming meets.

Klahs said she was recommended for the Rigali Service Award, which involves service and devotion beyond what’s expected to a school or parish.

Rigali was once archbishop in both the St. Louis and Philadelphia archdiocese before ascending to Cardinal.

She is the mother of seven children, and also has five grandchildren. Her youngest five children are all alumni of St. Agnes.

All of her children have been successful.

Phillip is a teacher at Iowa State University in Ames, Iowa. Kyle is a surgeon in the United States Army. Sawyer is a computer engineer for Boeing, the company her husband Bret works for.

Lilly works in the medical field in California. Abby is a double major in science and statistics at Iowa State. Luke is studying dentistry at Creighton University in Omaha and Keagon is enrolled in the nursing program through Mercy and Jefferson College.

“We are very happy that Debra’s longtime service to our parish is being recognized,” said a post on St. Agnes’ Facebook page.