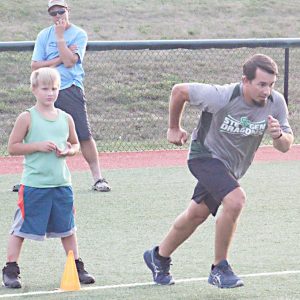 The Ste. Genevieve Impact football program is preparing for its 16th season with practices at Challenger Field.

Impact, like most things, has been a work in progress since the very beginning.

When the program was founded, board members built a regulation-sized football field at the Ste. Genevieve County Community Center in just 30 days. The original team colors were blue and green to match the high school squads.

Impact founders were Michael Boyd, then sports editor of the Herald, plus Jamie Reynolds, Jeff Gegg, Pam Billings and the late Carol Meyer.

These days, Sam Ritter serves as the organization’s president and the team wears black and silver in true Las Vegas Raider fashion.

“For me, it gives kids an opportunity to do something I wish I had been able to at that age,” Ritter said.

This year, Impact will field two teams, one for fifth- and sixth-graders and another for second-, third- and fourth-graders.

As it stands as of this story, the two squads have a combined 30 players, and Ritter is comfortable with that number.

Ritter said the goal of the Impact program is to help youngsters learn the fundamentals and develop a love for the game — which will hopefully carry on for when these players are on Ste. Genevieve and Valle Catholic’s rosters.

There was some hesitancy, on the part of parents, to participate in youth football last year because of the COVID-19 (coronavirus) pandemic., Ritter. There was just one team, and it went winless.

Michael Elbert will serve as the head coach for the older team, his 10th year with the program.

Elbert’s sons, Gabe and Noah, serve as the assistants.

Clint Wolk has been named coach of the younger squad. Wolk is no stranger to youth sports, having also been a coach and mentor in wrestling.

The first padded practice was slated for Tuesday evening at Challenger Field.