The road leading to the U.S. Fish and Wildlife refuse between the Urban Design Levee and the Mississippi River, meanwhile, was named Stormy Crawford Way.

Mueller noted that there had always been intentions of incorporating a recreational aspect into the massive Urban Design Levee, a product of the 1993 and 1995 floods that was completed in 2001.

“It took a long time to get this Urban Design Levee,” Mueller said, noting that 50 percent of the 25 highest floods here have taken place since the levee was completed.

A committee was formed in 2014 to pursue recreational use of the levee. Cabot, then director of tourism for Ste. Genevieve, chaired it. Long-time Levee District No. 3 president Vern Bauman, John Karl, Sara Menard, Kathy Waltz and Mueller were among the members. Mueller said that Norm Gallup, Gary Roth, Mary Lou Sampson and mayors Dick Greminger and Hassler all provided important input.

Mueller outlined the priorities or goals that had been pursued.

He said another goal was “to reinforce the historical connection between Ste. Genevieve and the Mississippi River.”

“Sometimes it’s a little bit too much of a connection,” he quipped. 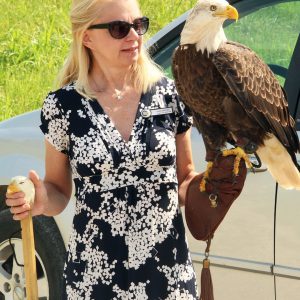 The other aspect was for exercise education and  as an economic boost to the community.

The USFWS signed an agreement late in 2018 that it would provide experienced staff to work with the other entities “to develop interpretive signs, design and construct nature trails, write self-guided brochures, enhance wildlife habitat, perform habitat and wildlife surveys” and more.

The goal of having a walking trail and a small parking area have been realized, Mueller said, along with interpretive kiosks and signs. They interpret fish, birds, plants and more.

He said nearly 275 birds either live there or migrate through, while deer, beaver, turkey, muskrat and other species are frequently seen there.

Sport fishing may be offered in the future, as well.

Cabot praised Mueller for “shepherding the community along” on the project. She also thanked federal and state elected officials, such as former Congressman Russ Carnahan.

“This project took more than a local village to create and to bring to completion,” Cabot said. She called the USFWS “our greatest partner.

Three bald  eagles were brought down from the World Bird Sanctuary, an organization founded by Crawford.

One was Liberty, Crawford’s favorite eagle prior to his death in 2015. Liberty is 28, the WBS’s oldest eagle. One of the other eagles, Patriot,  is also up in years, at age 23.