The Ste. Genevieve Levee Wildlife Refuge will undoubtedly become a sportsman’s paradise in the future. And you can thank Walter C. “Stormy” Crawford, Jr., for that.

Crawford was honored during a dedication at the levee on Friday morning, with mayor Hassler and other dignitaries cutting the ribbon — and making it official.

Stormy Crawford Way will run past the lawn debris site, on Division Street, up to the levee.

Crawford was many things to many people: a bird enthusiast, a conservationist, and even a swim coach.

“Stormy” served as the Ste. Genevieve youth swimming coach during the 1963 season, before Joe Basler and Gus Chatron took over that role.

Under Crawford’s coaching, the 1963 swim team was very successful — winning several regular-season meets. This is when Ste. Genevieve also had a diving team as well.

Steve Drury and Marie Drury were two of the most successful swimmers while Crawford coached.

Crawford even piloted Ste. Genevieve to the Southeast Missouri Swim Conference title that year, with 200 points. Kennett was second, 21 points behind, with Perryville and Cape Girardeau — the meet host — lagging.

So, for you current Ste. Genevieve Stingrays, let that serve you as a source of inspiration. 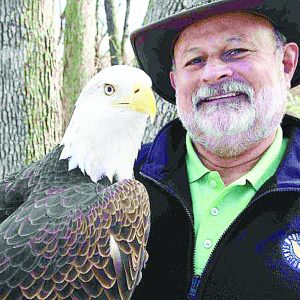 But, of course, most people will remember Crawford as a falconer and founder of the World Bird Sanctuary in the St. Louis suburb of Valley Park.

What can you do: fish, hike, walk, bike, bring along your pets so long as they are leashed, observe wildlife, take photos and gather berries and mushrooms for personal use only.

It’s expected — in the distant future — the United States Fish and Wildlife Service will have some sort of patrol there — like other parts of the mid-Mississippi River.

Crawford founded the World Bird Sanctuary and the National Wildlife Rehabilitators Association, serving as the vice president of the latter.

“Stormy” also was president of the International Association of Avian Trainers and Educators and appointed curator of ornithology (study of birds) and avian research at the Guyana Zoo in the South American city of Georgetown.

He was the recipient of numerous awards for conservation and wildlife rehabilitation efforts, and at one time, was a contributing writer for our Ste. Genevieve Herald.

He was a member of both the VFW and American Legion as a Vietnam War veteran.

(Thanks to local historian Robert Mueller for gleaning most of this information.)

Crawford became a bird enthusiast while growing up in the jungles of South America, where his father Walter Crawford, Sr., served as a petroleum engineer.

Then “Stormy” settled in Ste. Genevieve, the home city of his mother Lucille Jokerst Crawford. In 1977, he established the Raptor Rehabilitation and Propagation Project, which turned into the World Bird Sanctuary.

These days, the sanctuary has about 25 employees, according to an article found in the St. Louis Post-Dispatch.