On the 200th anniversary of Missouri’s statehood, Aug. 10, a ribbon-cutting ceremony was held to dedicate Ste. Genevieve’s contribution to the statewide celebration.

The Bicentennial plaza on the south side of the county’s new parking lot was dedicated, with local historian Bob Mueller making a few comments to the gathering.

Mueller and local business owner Lawrence Myers first approached the county commission in April 2019 about the possibility of putting the plaza in, following the demolition of the County Services Building and the construction of the parking lot.

“I give a lot of credit to my compatriot here, Lawrence Myers, who designed and selected the landscaping and handled the ordering for that,” Mueller said.

The plaza includes a gazebo or pavilion, which houses a kiosk with a “You Are Here” map on one side and a plaque commemorating Missouri’s first congressman, John Scott, on the other. Landscaping with various plants have recently been added. Two benches will soon be added as the final touches.

Mueller also thanked Presiding Commissioner Garry Nelson and the county commission, Holcim Concrete, whom he noted “have been very generous with their infrastructure funds” to help with the parking lot paving, the Rotary Club, Master Gardeners of Ste. Genevieve County, Sandra Cabot, and the Community Development Fund. 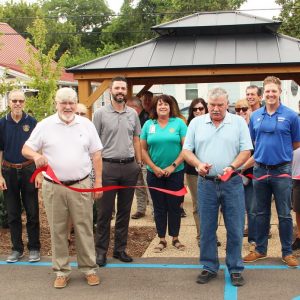 “As part of the signage, I know Garry wanted to have a ‘You Are Here’ sign so visitors to our town could acclimate themselves and we also have tributes to people who donated to this project,” Mueller said. “And on the other side, we have a plaque in honor of John Scott.”

Mueller gave some background on the early 19th-century congressman.

“John Scott was very important to the establishment of statehood for the state of Missouri,” Mueller said. “He was our first permanent lawyer. He came here in 1805. He had been educated at Princeton and had studied law.”

Edward Hempstead, who also spent time in Ste. Genevieve, had been the first territorial representative. Scott took over that position after Hempstead’s death in 1817.

“He was the one that was in Congress when all the petitions for Missouri statehood started,” Mueller said.

Celebrations took place across the state on Aug. 10 to mark the Missouri Bicentennial.

“I think it’s very fitting,” Mueller said. “This is the 200th anniversary being celebrated all around the state today with the Bicentennial, and Ste. Genevieve has its own little Bicentennial plaza, approved project by the Bicentennial Committee.”

He also expressed thanks to those who made it possible.

“A great thank you to everybody who contributed to this,” he said. “I think it’s going to be something great for visitors and the community alike, in the future.”