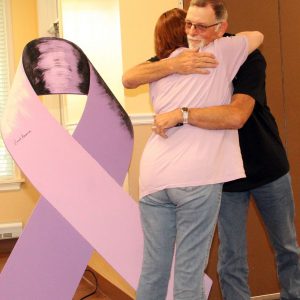 After professionals from several fields spoke about opioid addiction on Aug. 4, Bill Kraemer put a human face on the subject.

Kraemer, past president of Quarry & Allied Workers’ Local 830, has been leading the local movement to fight opioid addiction and promote the availability of Narcan since April 2018.

He helped facilitate bringing in National Council on Alcoholism and Drug Abuse [NCADA] counselors like Nicole Browning to town to give talks on the issue and has worked with elected officials to raise awareness and support for the issue.

He said his “aha moment” came in 2017 when he heard another labor official speak at an event and talk about the death of his son to an overdose.

“If we don’t put a face with overdoses, no one knows,” he said. “Sixty-three thousand people doesn’t have a face, unless it’s your son or your daughter or your neighbor.”

About a year later, the opioid situation struck home for Kraemer.

“My daughter was taking extremely high doses of opiates under the care of a doctor until she had a bad urine test,” Kraemer said. “He cut her off and said to find another doctor.”

Suddenly cut off from the medication, she was put in a desperate situation.

“She turned to the streets,”  he said.”She found pharmacists up in St. Louis on one of the state streets up there that would mix her whatever she would pay for.”

She started with pills, but like many addicts, turned to heroin, which is much less expensive.

He said every time he became suspicious and confronted her, she assured him she was following a doctor’s directives and was fine.

“People who are taking will tell you anything, he said. “They’re extremely great liars because that’s what they do to feed their habit. They’ve got to.”

He then noted the importance of having Narcan, an opioid antagonist used for reversing affects of an opioid overdose, including respiratory depression. He compared having it in the home to having a fire extinguisher on hand.

He stressed that sitting the person down “and having that conversation,” even though they will probably deny it.

After being caught with needles, his daughter was forced to go through detox. He knew he needed to have Narcan on hand by the time she got out three days later. No area pharmacies had it on hand at that time. One that did get it could not yet sell it.

Kraemer had a tracer attached to her car and saw that she had made a run to St. Louis immediately after being released. He knew it was to get heroin.

“They detoxed her. She didn’t have any opiates in her system, but she had not been treated,” he said. “She still had that desire.”

And when she got her fix, she overdosed on fentanyl-lased heroin in their bathroom.

By the time he got the door open and dragged her out, she had no breath and no heartbeat.

“She was gone,” he said. “But I knew there was some  chance that through CPR and an ambulance getting there with Narcan, we could get her back.”

They called 911 and started CPR. She had turned “elephant gray,” with blue lips by this time.

The ambulance got there bout 12 minutes after the overdose took place and started an IV with Narcan.

“Within about two minutes she blinked her eyes and took a breath,” Kraemer said. “Bottom line is, we saved her life … As the good Lord would have it, I’ve got her back today.”

He stresses that every house should have Narcan.