Several professionals discussed the dangers of America’s opioid addition problem and looked at possible solutions during a public forum at the Ste. Genevieve County Community Center on Aug. 4. The event was put on by the local University of Missouri Extension office.

Estrella Carmona  of the extension office gave opening remarks. She noted that the forum was “one piece of a larger movement” in trying to fight a crisis that is resulting in the death of five Missourians every day.

With St. Louis, the state’s “epicenter” just an hour away, she noted that this puts Ste. Genevieve at special risk of illegal opioids coming into the town.

She said the extension’s goal was to bring together various groups to combat the problem. She noted that some successful programs are already underway, like the biannual drug take-back days. The last time one was held, 49 pounds of unused prescription drugs was turned in. She called it “a collaborative effort.” She also pointed out that 18 million Americans have admitted that they have misused prescription medication at least once. 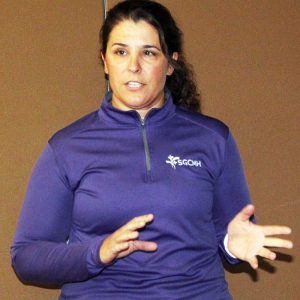 Fowler, SGCMH pharmacy director, outlined steps that have been taken to curb the over prescription of addictive opioid pain-killers.

She explained the concept of Morphine Milligram Equivalent (MME), a value given to opioids, based on their potency.  Dosages of  50 MME per day increase the likelihood of an overdose by at least two times.

This risk assessment tool has been valuable in monitoring the amount of opioids given.

So has the prescription drug monitoring program the state implemented, which allows physicians and pharmacists  to make sure  individuals are not getting multiple prescriptions filled at various locations.

In 2016 the Center for Disease Control (CDC) released guidelines for chronic pain management. SGCMH picked some of these to focus on.

The hospital  also began offering Narcan, an opioid antagonist used for reversing affects of an opioid overdose, including respiratory depression.

“Tapering” the high-MME patients down to safer levels also became a big goal, since cutting people off cold turkey can be equally dangerous. They would then be referred to pain management programs.

The Opioid Stewardship Committee was formed. Policies were updated and the NewVision recovery program was instituted.

Vaeth then spoke on the importance of Narcan as a life-saving tool.

She said she has children, ages 1 and 4 and urged parents in the community to think of their children and their safety, in the promotion of Narcan.

Narcan is given out as a nasal spray at the health department. Given in time to an overdose patient, it can save the person’s life.

“If someone was to call the health department at any point and time and want Narcan, the biggest thing I want the community to know is we do not question it,” Vaeth said. “We do not say, ‘Who is this for? Why do you need it? What’s going on?’ We don’t care. You think you need Narcan, we’re going to give you Narcan – whether it’s because you have a family member or a friend you know is using and you want to have this in case you need it for them. Maybe you have a teenager coming home from a knee surgery with opioids and you just want to have it in your house, just in case. That’s fine; we’ll give it to you.”

In other words, no questions will be asked.