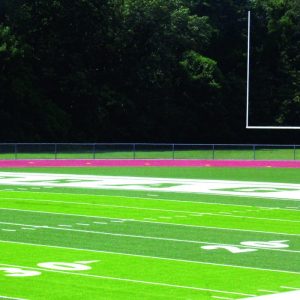 The Ste. Genevieve Herald will be publishing its special fall section during the month of September.

The publication will feature what the fans — and parents — like to see.

The official theme for the publication has been chosen.

That’s a pretty appropriate theme considering what’s been happening around Ste. Genevieve during the past few months.

Look at what’s taken shape at Dragon Field throughout July and August, with a new, slick artificial turf surface.

Byrne & Jones was approved for the remodel during a Ste. Genevieve R-II School District board meeting in the spring.

On Saturday, the Ste. Genevieve Herald shot a short video of the finished product, minus a worker cleaning off excess rubber with a blower.

— outliving most that last just a decade.

The new surface came with a price tag of $595,371. But, the upgrade will pay for itself because of how little maintenance is needed.

Look for the Herald to shoot additional video on the Dempsey Field update this week.

Improvements to Dempsey Field have been accomplished through the sweat equity of men like Bill Lurk and Nick Fallert — plus 30 more volunteers and additional monetary donations from alumni.

Dempsey Field was sprigged as part of the upgrade.

Sprigging is a fascinating process which involves the process of planting sprigs, or plant sections. The sprigs are spaced at various intervals in furrows or holes.

The underground sprinkler system has been feeding water onto the new Bermuda grass surface.

There also will be a new track ringing the football field, under construction soon. Father Dempsey Field has not received an upgrade since the 1980s.

The yard numbers at Dragon Field have a new font style, and the coaches’ boxes have been adorned with the familiar cheering words of “Loyal and True.”

The first installment of the “Old Settlement Showdown” — between Ste. Genevieve and Valle Catholic — will take place on Sept. 3 at Dragon Field. The Dragons will look to defend their new “turf” against the Warriors.

Both Dragon and Dempsey Fields are sure to create more memories this season.