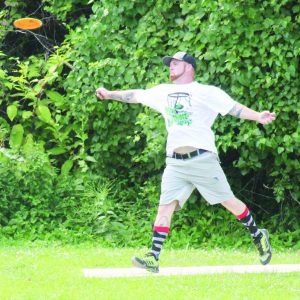 Heat indices crept close to 100 degrees before rain fell during the final hole of the second and final round — golfers were able to complete play.

Kemp participated in the recreational division, throwing a 9-over par 127, which was good enough for 17th place.

Seth Wood, a professional from Farmington, was the pro division winner firing a 36-hole total of 93. That worked out to 25-under par.

Wood essentially dominated the competition, winning with five fewer throws than Josh Coghill from Southaven, Miss. Cory Folkins, from O’Fallon, was third at 19-under par.

Thanks to the diligent work of Ste. Genevieve Parks and Recreation board member Geoff Duvall, the course played more difficult in 2021 — roughly 300 feet further as a par-59.

“Maybe it played a little harder with the pin placements,” Duvall said.

Duvall said heat, and the lush woods, were the main reasons for tough scoring.

The field was completely full with 90 participants; however, several golfers withdrew due to heat or poor performance.