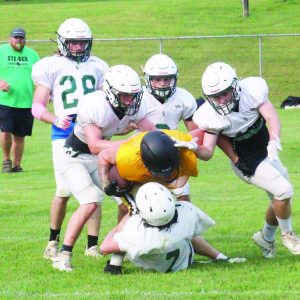 On a searing Thursday morning in late July, the Ste. Genevieve High School football team participated in a scrimmage against Cuba.

Cuba, last year in Class 2 District 2, put together a record of 6-5 — eliminated in the second round of the state tournament by Lutheran St. Charles.

New Madrid County Central was also slated to participate in the scrimmage; however, the Eagles backed out last Wednesday.

“The first session was a true, live game simulation, minus special teams,” Pope said. “The second portion had each team taking turns in common situations, two-minute drill and red zone.”

What made the experience even more memorable for the Dragons?

It had to be conducted at Yanks’ Field South because Dragon Field isn’t quite ready.

Contractor Byrne and Jones is still placing rubber and sand onto the new synthetic turf surface. The track has been painted.

“It will carry some nostalgia for years to come,” said Pope, who couldn’t think of a time when Ste. Genevieve played a game at Yanks.

“Setting the field up for play was a unique experience,” Pope explained. “Lining a field that has never been laid out for a football scrimmage is an antiquated art..”

Offensive coordinator Kellen Basler lined the field with some help from Google. Mike Basler and Jerry Staab at Midwest Lawns also assisted in the process.

The field covered 40 yards, and part of the end zone was the dirt infield Ste. Genevieve major division recreational baseball players use.

Now, how about the Dragons performance in the scrimmage — Ste. Genevieve scored five of the first six TD during the event.

“Cuba was firing on all cylinders down the stretch before having their 2020 season shut down,” noted Pope. Cuba defeated Jefferson R-7 during the regular season.

Pope said Cuba presented Ste. Genevieve with an appropriate challenge, a gauge to see where the Dragons were at the end of the summer sessions.

The Dragons eventually scored TD on eight of nine drives, with many of the drives lasting only two or three plays with how explosive Ste. Genevieve played.