Other than the flood of 1993, every summer since 1967 has seen thousands of people flock to Ste. Genevieve for Jour de Fete.

Last year, the COVID-19 pandemic cancelled the annual festival for only the second time in its half-century history.

It is coming back at full strength next week, Saturday, Aug. 14 and Sunday, Aug. 15.

Jami Inman, long time Jour de Fete Committee president, is excited to see the event bounce back – although she admitted it also feels a little odd.

“It’s kind of strange. We didn’t do it last year, so it’s almost like starting all over again,” she said. “It’s a little different.”

Inman expects the event to be about the same size it had been in recent years, despite the one-year layoff.

As of Sunday, there were already 116 crafters, plus food and alcohol vendors signed up. Inman said applications were still coming in.

That would put the festival about where the 2019 figures were.

Instead of contracting with Huskey Bus Service, visitors will be transported from the parking area at Eric Scott Leathers by the Ste. Genevieve Trolley.

Use of the trolley is not restricted to those parking at Eric Scott, either.

“Anybody that wants to jump on and take a lap out to the parking lot and back, they’re more than welcome to, they said,” Inman told the Herald. “They’re going to be going anyway, so if anybody wants to jump on catch a ride.” 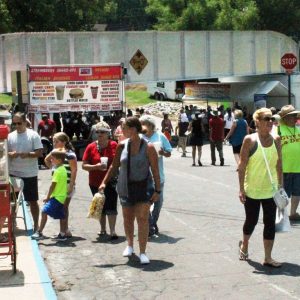 Lost Acres Tractor Club will have an antique tractor show on Saturday and Sunday, which is also new. It will be held by the Ratte-Hoffman House at the end of South Main. Meanwhile a car show and chicken dinner will be held at the Knights of Columbus Hall on Market Street on Sunday only.

The Jour de Fete Committee is naturally pleased to see the festival bouncing back.

“We’re looking forward to it,” Inman said. “It will be nice, bringing some tourists into Ste. Gen and some income into the county.”

“All of the food and alcohol vendors are on board,” she said.

McAlister’s Deli is the only one unable to come back.

Meanwhile a bouncy house and additional children’s activities – all free –will take place near the Moses Austin House on the Jour de Fete property.