It took the Ste. Genevieve Heritage Commission only about 10 minutes to take care of business on July 26.

The only new business was the Church of Ste. Genevieve’s request to receive a certificate of appropriateness to replace two rear wooden windows with aluminum-clad wood windows and to install two aluminum-clad wood windows on the south side of the building in place of two wall air conditioning units at 62 South Third Street, the former Valle Catholic Boverie Building.

Dick Greminger of Rivertown Windows was present to answer questions about the project.

“The windows in the back are  not in very good shape and they wanted to do something that was pretty less maintenance,” he said. “They came to us.” 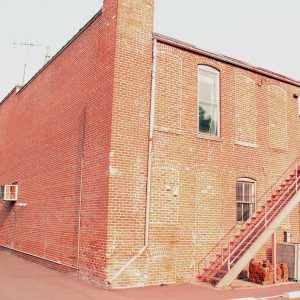 He said the window they chose was all wood inside, but aluminum-clad on the outside and had the same dimensions as the old windows.

He said it would be “made to fit within the masonry opening that is there.”

Community development administrator David Bova said that it was not certain whether the building had originally had one-over-one style windows or two-over-two. He said a pair of existing old photographs are not clear in that detail.

Myers said  he felt the “only basis for argument” against the move was the number of panes in the windows and that, with the lack of clear historical photos, “That argument could last forever.”