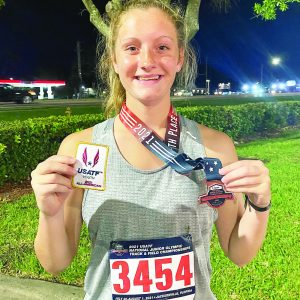 “The competition pushed me to throw farther,” Flieg said in a brief telephone interview with the Ste. Genevieve Herald on Monday.

Flieg reported it was her best throw of the summer.

During the national meet, she received three throws during the preliminaries and three more during the finals.

Erikka Hill, a standout scholastic thrower from Indiana, was the winner with a mark of 45.15m (or 148-feet). Hill competes for the club, AthLead Indy, and she signed a Letter of Intent to compete at the University of Miami.

Saydi Orange, from Washington, and Amaani Hogan of Georgia rounded out the top-5 competitors with respective marks of 41.98m and 41.00m. Hogan hasn’t committed to a college.

Flieg said she was able to work on different aspects of throwing the javelin through the course of six attempts.

This has been a whirlwind summer for Flieg, who also has competed with the Jets track and field team based in Jefferson County.

Flieg also has participated in track and field meets in Oregon and elsewhere this summer.

She will compete at the Amateur Athletic Union Junior Olympic Games this weekend in the Houston suburb of Humble.