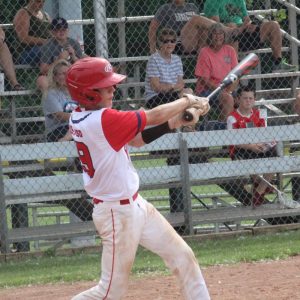 The Ste. Genevieve Post No. 150 junior and freshman teams wrapped up their respective seasons at tournaments this past week.

The freshmen competed at the state tournament at the Ballwin Baseball Association Complex.

Meanwhile, the Post No. 150 juniors participated in the Zone Tournament at Herzog Field in Jackson because they were second at the district tournament here the week before.

The juniors went 1-2 before bowing out of the Zone Tournament, beating Sikeston 12-4 on Friday, July 16.

However, they lost to Jackson 5-1 on Thursday and the Festus Reds 17s, 10-9, on Saturday during this double-elimination event. Overall, the juniors finished the tournament in a tie for third, and wrapped up the season with a 17-14 record.

The freshmen (14-10) were ousted after losses to Kirksville, 11-3, and Jefferson City, 18-7. The state tournament also featured a double-elimination format.