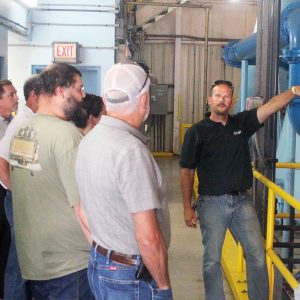 “I think it was good to get together and see the different facilities,” said city administrator Happy Welch.

Elected officials learned plenty, gaining an understanding of the decisions they make during regular board meetings.

Wilson, Smith and Roth fully explained the roles of each department – ranging from parts of the water plant to the number of employees in each sector.

Currently, the biggest concern there is the interior location of an electrical panel that’s been subjected to chlorine.

Cochran Engineering is putting together design specifications for the electrical grid.

The current panel “sparked,” and even showed signs of functioning even when it was reportedly turned off – as explained in a previous aldermanic meeting report in the Herald (June 16).

The panel features switches and generator back-up. Welch said, under sheltered circumstances, the unit has a shelf life of about 50 years.

Moreover, placing the panel inside the plant has proven to be a design flaw.

A replacement electrical panel will come with a $175,000-$200,000 price tag, with the city hoping to use American Rescue Plan funds. Wilson said the next panel will be placed outside the plant, a few feet east of the existing building.

The water plant opened in 1994, and this reportedly marked only the second time since it was open the facility was open to the public.

The plant features a claricone clarifier, four filters, a testing lab and an outside head tank.

It was reported during the tour Alliance doesn’t fluoridate Ste. Genevieve’s water system.

Roth extolled the virtues of the street department facility, which assembles traffic signs for use on city roads. Two signs are currently being painted to be placed on the bridge over the Gabouri creeks.

The shed also houses plenty of the new LED-style street lights and – believe it or not – there was still available salt even after this past icy winter.

At the sewage treatment facility, Wilson reported Alliance performs e.coli testing in house – which saves the city money. Samples are sent to the Department of Natural Resources in Jefferson City for additional testing, including metals, Wilson reported.

Filters at the water sewage treatment plant have a tough job. The system needs constant raking. Some of the items reportedly found during the process: $100 bills, toys, flushable wipes, lingerie and even Ste. Genevieve County jumpsuits.

Welch said a future tour of facilities will be scheduled, which will include a visit to the Ste. Genevieve National Historical Park Welcome Center and Pere Marquette Park House.

Before the tour began, and after the regular meeting, Nancy Cozean presented Mayor Paul Hassler with a framed resolution and “Plank Road Trail” signage.

Welch said the city will look for a spot for the green-and-white sign, which features two horses drawing a carriage.