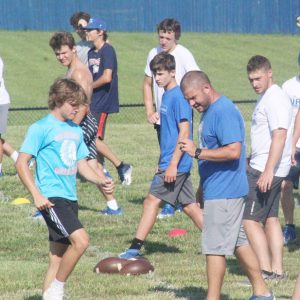 Naeger said the team has been working on speed development and fundamentals, trying to keep football activities to a minimum in June.

This allows the Warriors’ multi-sport athletes to play baseball and compete in basketball.

The Warriors’ players may have extra motivation — especially since they’re practicing next to Father John Dempsey Field, which is undergoing a makeover of its own. The field was recently sprigged, and new grass continues to grow.

Sprigging involves planting sprigs or plant sections at spaced intervals in furrows or holes, according to the University of Tennessee’s turf management manual.

Dempsey Field also will have a new, paved surface for the Warrior track and field program.

“Everything is going as planned,” Naeger noted. “The grass is coming in nicely, and the track is being given some time to settle to ensure it was be solid come asphalt time later this summer.

“The amount of time, talent and treasure that was donated to this project is a tremendous example of servant leadership for our young men to look up to,” Naeger continued. “We look forward to celebrating all these individuals.”

Practice is set to ramp up for Valle Catholic.

Naeger said there will be three, three- or four-day camps during the final three weeks of July. Players also will continue with a strict weight lifting regimen.