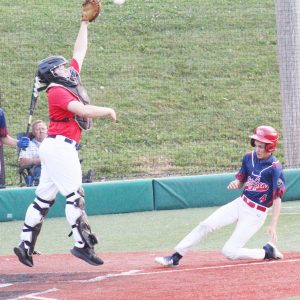 POTOSI — The Ste. Genevieve Post No. 150 freshmen team knocked off Potosi, 15-1, in the championship game last Friday at the Trojan Sports Complex.

In the opening round of the tournament, DeSoto topped Potosi 17-7 while St. Genevieve topped DeSoto 9-3.

Ste. Genevieve Post No. 150’s first game will be Wednesday in Ballwin.

Post No. 150 scored eight runs in the first inning of the championship game, and never looked back.

Carter Viox earned the win, allowing one unearned run on four hits and four walks over four innings. He threw 68 pitches, 39 of them for strikes (57.3 percent). Tucker Reed pitched the fifth inning.

The Festus Reds 17’s team knocked off Ste. Genevieve twice to win the event, with an 11-1 victory on Wednesday, July 7 and 3-2 this past Friday.

However, Cohen Gibbs was left stranded at third base, Viox second and Grant Fallert at first with both Rylan Fallert and Bryant Schwent striking out looking to end the game.

The Festus Reds 17s advance to the Junior Zone Tournament set to take place from Thursday through Sunday, July 15-18, at Sikeston.

The senior tournament began on Tuesday evening with Ste. Genevieve squaring off against Rock Memorial (Imperial) at Yanks’ Field. Festus would play the winner of Monday’s game between Bonne Terre and DeSoto.

The championship game is slated for 5 p.m. Friday, with a second game at 7:30 p.m. the same night — if needed.