There is only one area where she enjoys proving her wrong.

Some two years before her death in 1990, Emma Jokerst was the subject of a feature story by Betty Valle Gegg in the August  3, 1988 Herald. Nearing her 90th birthday, Emma had completed more than 700 quilts, but bemoaned the fact that quilting seemed to be dying out.

“The young generation, they don’t start quilting anymore,” Emma Jokerst told the Herald in 1988. “Next generation, there won’t be any quilts made They won’t quilt anymore. They are all out working and doing other stuff.”

Although she realizes she will never catch her Grandma Jokerst for total number of quilts made, Carolyn has certainly kept the quilting tradition alive in the family.

Of course that 1988 article is one of Carolyn’s prized possessions.

“This morning I was reading it and she said in a roundabout way she didn’t think anybody would follow her footsteps on quilting,” Carolyn said.

She has indeed followed in her grandmother’s footsteps.

“I wanted my grandma to know – I know she can’t hear me – but I wanted her to know that I continued on her tradition,” Carolyn said. “Because I think it’s stated in here she didn’t think anybody would carry it on.”

Carolyn, who now lives in Perryville, has 68 quilts in storage.

“I don’t think I’ll ever catch up with Grandma,” she said. “For many, many years I carried on her tradition, though. I love to sew.” 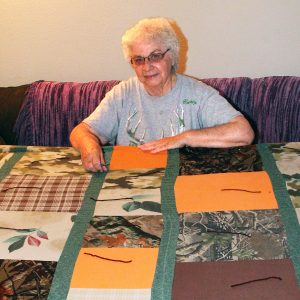 In 1948, Carolyn’s mother, Pearl Jokerst, died. Carolyn, then 4, and her Brother Ron, 2, went to live with their grandparents, Emma and Valentine Jokerst, on their farm near Zell.

“I was 4 years old and my brother was 2, so, needless to say, we learned a lot from the farm growing up at our age,” Carolyn said, “butchering, cooking, gardening, fishing, threshing, wheat bailing. My chore was milking the cows and gathering the eggs mornings and after school.”

The move to the farm required an adjustment.

“It was different. We didn’t live on a farm before,” she said. “We started out in Zell. We lived in a little house behind Fish’s Store. I was born in an old house behind Perry County Lake.”

While staying with Emma and Valentine Jokerst, Carolyn went to school at Zell. Her dad remarried when she was 10, but she stayed with Emma two more years, before moving in with her dad and his new wife about 1956.

Carolyn suffered farm withdrawal after moving back to town.

“It was different after I went back to live with my dad,” she said. “We didn’t get to go fishing or take a bath down at the pond. I missed all that. At the time I was wishing we could have all stayed with my grandmother.”

Carolyn was introduced to quilting very early by Grandma Jokerst.

“When I was about 5 years old my grandma told me I had to help her out – like on quilting,” she said. “I started learning how to thread the needle. I had about 10 to 12 of them I had to do at a time. My grandma was fast at quilting. Then I helped her out sewing about a year later. But there were many times she had to rip them out because it got too large.”

She took part in many other activities, as well, as she grew older.

“We had to help out on butchering, also,” she said. “I was the main one who carried the wine to everybody. Every couple of hours I gave them a swallow of wine, to try to keep them warm.

“I learned a lot when we were living with my grandparents.”