Faulkner was concerned that his business was not involved with the current renovation project at Dragon Field.

“We’ve had an excavating company in the county for a long time,” Faulkner said. “We have 20 employees. But, (you) went in a different direction.” 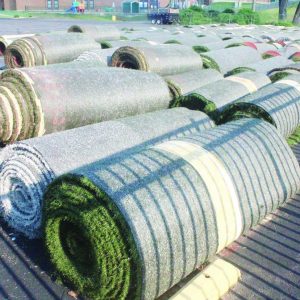 Sunday evening, rolls of the prior artificial turf could be seen — all strewn in front of the typical entrance into the stadium.

Faulkner expressed that it “was not a good feeling,” seeing that the school district approved a contract last April with Byrne and Jones Construction, a similar outfit based in the St. Louis suburb of Bridgeton.

Based in Bloomsdale, R&K Excavating has a working relationship with ATG Sports Industries, general contractors based in Festus.

It certainly was a different process the first time Dragon Field was upgraded, complete with an artificial surface.

Back in 2006, Faulkner reported meeting with the late superintendent Dr. Mikel Stewart and then head football coach Bob Stolzer on the project.

Faulkner was eager and excited to help, with community involvement at the forefront.