The tournament began on Monday with Rock Memorial defeating the Festus 16s. They played the No. 1 seed Festus 17s on Tuesday evening.

Loser’s bracket games begin at 5 p.m. tonight, with a tournament semifinal at 7:30 p.m. The championship game will be at 5 p.m. Friday, with an “if necessary” game to follow.

Pitch counts will be given, recorded and sent to Ste. Gen coaches Dr. Jeff Nix or Matt Fallert after each game.

The freshman district tournament is taking place at the Trojan Sports Complex in Potosi.

The Herald has not yet received the freshmen or senior brackets.

The senior tournament also will be taking place in Ste. Genevieve, set for next week. 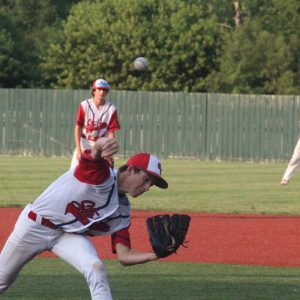 Highlights: Keaton Boyer was 2-for-3 and Zach Boyer 2-for-4 with a double as Ste. Genevieve topped DeSoto by four runs. Hunter Lorance drove in two runs and Jayden Gegg also slugged a double. Nathan Selby pitched four innings, earning the win. Selby struck out seven and walked four while allowing one earned run on two hits.

Highlights: Austin Burnett fueled Ste. Genevieve with a three-run home run and a double as part of a 3-for-4 hitting performance. Jayden Gegg and Bieser both scored twice. Keaton Boyer also drove in two runs. Keaton Boyer and Bieser also doubled for the winners. Carter Klump and Drew Bauman both pitched, with Bauman picking up the win. Bauman struck out five and walked two while allowing four earned runs on six hits in four innings.

Highlights: Austin Viox was 2-for-4 with a pair of RBI. Cannon Wolk also drove in two runs for Post No. 15. Isaac Viox, Austin Viox and Rylan Fallert all doubled. Wolk took the loss, allowing two earned runs on five hits with four strikeouts and just one walk in three innings of work.