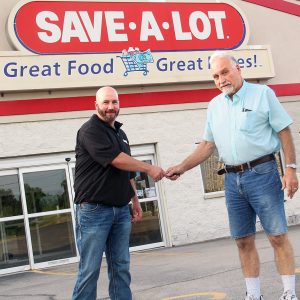 Nearing his 68th birthday, Tom Friedman decided it was time to call it a career.

The long time Save-A-Lot owner officially turned over his store keys to Clint Price on June 30.

Friedman had been trying to sell the business and retire when Price and Leftridge Retail Partners, LLC, of Bonne Terre made an offer.

“I put the  business up for sell, basically, because I’m just burned out,” Friedman said. “I’ve  been here so long, and I’m going to be 68 years old. So, I thought it was time to make the move. My meat-cutter was retiring at the same time, so I thought it’s now or never, so I put it up for sale. I was lucky enough to get these guys.”

Friedman has been putting in long hours with Save-A-Lot for 42 years. He managed the old store on Triangle Drive (now the home of Hope Church), which his father Ray Friedman built in 1979. Friedman managed it until 1989, when he bought the owner out and moved the operation to its current location.

He is confident Price and is group will do a good job with the store.

“Clint and his wife will do a great job here,” Friedman said. “They’re great people. They’ve already made a lot of changes for the better. They’re going to make a lot more changes. It’s really looking good.

“They’re going to make some great changes. It’s already shown the last couple of weeks. Sales have been up and it looks great.”

Price, who has managed Bonne Terre Save-A-Lot for 22 years, will step in as store manager here.

He isn’t planning any sweeping changes.