Oppressive heat marred the final day of the Big BAM (Bicycle Across Missouri) tour, which stopped for the very first time in Ste. Genevieve County this year.

Despite heat indices of more than 100 degrees on Friday, June 18, the event ended with plenty of fanfare as riders enjoyed music from the band, Crossroads, on Main Street.

“It was a very positive experience, and we were pleased with the route,” said Missouri Life Magazine publisher Greg Wood. ”We rode diverse terrain and saw placed we had never seen.”

Wood reported 21 states were represented, with more than 160 cyclists registered for the event. Some of the entries were from as far away as Nevada.

Because of the heat, many riders decided to get on the trail before sunrise, with many of them arriving in downtown Ste. Genevieve about 9 a.m. Only a handful of riders trickled in as roads began to sear. 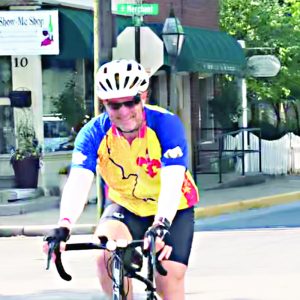 Even though this was Pautler’s first time biking in the Big BAM, he has ridden in the Hotter ‘N’ Hell 100 seven times having spent years as a Texas resident.

Hotter ‘N’ Hell takes place in the sultry, southern city of Wichita Falls, Texas, the final weekend of August — one of the biggest cycling spectacles this nation has to offer.

He’s ridden in supported and unsupported tours throughout Utah, New Mexico and Colorado — covering as much as 500 miles.

He also once biked along Interstate-57 from Cairo to Chicago.

Cycling has been a passion for Pautler since the 1980s, using it as a tool to lose weight. He’s covered thousands of miles more than 30 years.