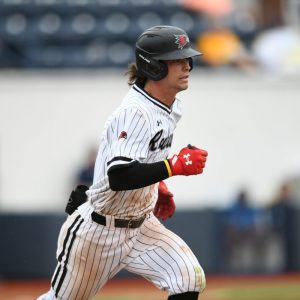 CAPE GIRARDEAU — There was a lengthy stretch during the 2021 season the Southeast Missouri State University baseball team was pensive on the base paths.

From April 16 through May 29, Ste. Genevieve native Connor Basler didn’t record any stolen bases. Still, he was oh-so close to the record.

During the final three games of his college career, Basler had one stolen base in each of them in establishing a new Redhawk benchmark.

“Our running picked back up (at the end of season),” noted Basler in a telephone interview with the Ste. Genevieve Herald on Sunday evening. “It was super cool that I did it.”

Basler is now the all-time leader in SEMO history with 53 stolen bases in his career, one more than Denver Stuckey’s 52 — a record that had stood since 2003.

“Connor was as good of a baseball player as we’ve ever had,” said Valle Catholic head coach Nathan Gegg. “He had natural abilities that are very uncommon, and he was incredibly ‘baseball smart.’”

With one out in the bottom of the fifth inning at an NCAA Division I Regional game versus Southern Miss in Oxford, Miss., Basler turned toward second base and swiped it.

Basler was one of only four Redhawk players to get a hit in a tough 21-0 loss to Southern Miss. He was stranded at second.

The Redhawks finished the season with a 30-22 record, including 13-8 at Capaha Park in Cape Girardeau. They were 17-10 in the Ohio Valley Conference — winning the postseason tournament, 10-1, over Murray State.

SEMO lost both of its games at the NCAA Division I Regional Tournament, ending Basler’s standout collegiate career.

Gegg was pleased to see Basler break through into the Redhawks’ starting line-up as a freshman infielder.

“We always thought if he got a shot early on at SEMO, he wouldn’t relinquish the job,” Gegg said. “His ability to play defense, play small ball, and do his job are hard to overlook.”

Basler wrapped up his fifth and final season for the Redhawks with a .241/.333/.319 slash line — with the respective percentages for batting, on-base mark and slugging.

Basler said he made his biggest memories in college baseball this year as the Redhawks won the league tournament. The Redhawks also won regular-season titles during Connor’s time at SEMO.

What’s more, Basler homered during the fifth inning on Senior Day May 20 in front of family and friends as SEMO downed University of Tennessee-Martin, 6-2.

Basler had two home runs and seven doubles while recording 27 RBIs and scoring 28 runs. His fielding percentage was an impeccable .953 with 81 putouts and 124 assists.

Looking back, Basler said he was blessed to play a fifth season — which the NCAA granted him due to the COVID-19 (coronavirus) pandemic.