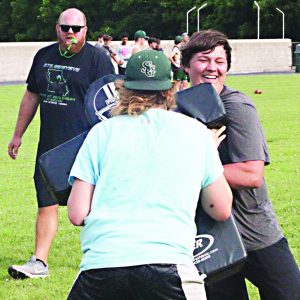 Pope is encouraged with the early returns.

“I think it’s going well,” Pope said. “It’s starting to become a routine. Things are now becoming habit, and they are beginning get settled. I think the players are comfortable with our approach, and the effort has been great.”

Pope was hired last March, three months after former coach Ken Weik turned in his resignation — which was accepted by the Ste. Genevieve R-II board of education.

Indications are that Ste. Genevieve will suit up roughly 65 players for football, which is a slight increase in participation according to Pope.

Because of student vacations, and other reasons, average daily participation has been right around 55 players.

The Missouri State High School Activities Association allows 20 contact days during the summer, but the players won’t be in full pads until after the 4th of July break.

The team has been participating in weights until beginning camp this past week, which will run through July 27 — mainly on Mondays, Tuesdays and Thursdays.

Pope said the Dragons’ scrimmage set for Thursday, July 29, at Dragon Field is still on — in accordance with local health guidelines and MSHSAA regulations. The scrimmage will account for “three contact dates,” Pope noted.

The scrimmage will begin at 10 a.m., with Cuba and New Madrid County Central serving as the opposition.