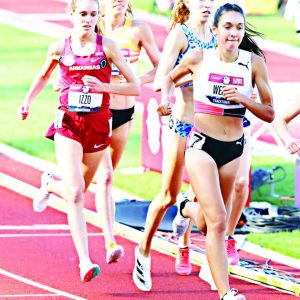 Werner, now competing for Puma, advanced to the finals of the 5,000-meter run after a 14th-place finish during Friday’s preliminaries at the U.S. Olympic Trials at Hayward Field.

Katie Izzo, also a University of Arkansas runner, competed alongside Werner in the 5,000-meter run.

Werner clocked in with a time of 15 minutes, 39.98 seconds, good enough for sixth in the heat.

A Bloomsdale native, Werner was set to compete in the 5,000-meter finals at 7:40 p.m. on Monday evening, too late for this press run of the Ste. Genevieve Herald.

Read more in the June 30 edition of the Herald.