The Ste. Genevieve Stingrays swim program had its first-ever home meet this past Saturday at River Rapids Waterpark.

According to local historian Bob Mueller, this was the first home swim meet conducted in Ste. Genevieve since 1978.

“Our team has been excited for this pool since the first announcement of the waterpark installing a regulation-size pool two year ago,” said Stingrays’ head coach Erin Ingram. “Being able to have this pool, and our first meet in said pool was all it took to get these swimmers excited.”

Swimmers might have been slightly bleary-eyed entering the facility for warm-ups at 6:30 a.m.; however, the Stingrays took to the water and met with heaps of success.

“Jamie’s planning and organizational skills were most definitely put to use, and it all paid off,” Ingram said. “The parents worked many jobs during the meet. Without them this could not have been done.” 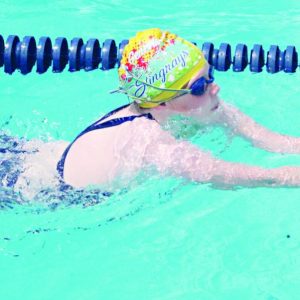 Coaches and even young swimmers commented about how smoothly run the meet was run.

There were some technical issues with the Dolphin-based timing system, but team scores are expected to appear in the June 30 edition of the Herald.

River City Aquatics from Cape Girardeau was a late entrant, and dominated the proceedings — especially since many of those swimmers do so year-round.

“It was a learning experience for the team,” Ingram noted. The Stingrays were missing some swimmers, but those who were present competed well.

Other teams had themed nicknames, including the Perryville Piranhas and F.A.S.T., a group out of Farmington. Poplar Bluff also brought a contingent of swimmers.

Some swimmers dropped as much as 10 seconds off previous-best times.

“They were tough, ready and proud to be standing on the blocks,” Ingram said. “They gave it their absolute best, and continued to push harder each race. As their head coach, I couldn’t be any more proud of this team.”

Elizabeth Sulser qualified for the upcoming Junior Olympics in the 50-meter backstroke. Sulser swam in with a third-place finish in a stellar time of 41.29 seconds.  The Junior Olympics will take place in Houston later this year.