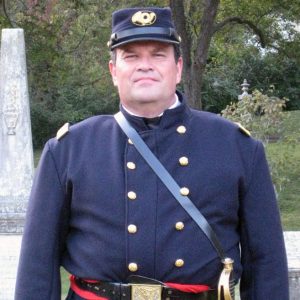 Gary Scheel, a member of the Ste. Genevieve Lt. Col. J. Felix St. James, Camp No. 326, was elected department commander, Department of Missouri with Arkansas, Sons of Union Veterans of the Civil War on June 5.

A past commander of the local camp, Scheel  has served in various offices.

The former owner of Somewhere Inn Time bed and breakfast, Scheel came into his Civil War passion as an adult.

“I wanted to be a history teacher, but it didn’t work out,” he said. “When I reached about 40, I became interested in my ancestor, who had fought in the Civil War. I was talking to my mom on day and she said, ‘You need to go find out what he did.’”

So, Scheel dove into the research and traced Private Fielding Jenkins Smith, originally from Gasconade County,  who fought in the 31st Missouri Infantry Regiment, serving under General  William Tecumseh Sherman

That led him to write the first of three books he has written on the Civil War, “Rain, Mud & Swamps: The Story of the 31st Missouri Volunteer Infantry,” in 1998.

“I had no concept of ever doing that before.,” he said. “I thought it was a good history for someone to learn about. It was an experience. I went to every battlefield they were at, 12 major battlefields and 29 skirmishes. They marched through 11 of the 13 states in the Confederacy. I thought some of that stuff needs to be documented.

“From there, it just kind of snowballed.”

Since then he has written “We Have Seen Hard Times: From the Battle of Pilot Knob Missouri to Pulaski, Tennessee,” which chronicles the 47th Missouri Infantry Regiment, and “66 Miles in 39 hours: The Retreat From Fort Davidson.”

In recent years, Scheel has gotten active in the Sons of Union Veterans (SUV).

“When we ran the bed ad breakfast, it limited my participation but I’m starting to get back into it,” he said.