Swinging through Ste. Genevieve to see the sites and spend the night while touring the Mississippi River region is not uncommon.

What is uncommon are Traci Lynn Martin’s means of travel and her reason for the trip.

Martin, 53, is attempting to set a “Guinness Book of World Records” mark for fastest female solo time paddling down the Mississippi from its headwaters to Mile Marker 0 in New Orleans. 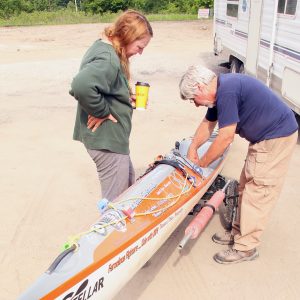 She pulled into Little Rock Landing north of Ste. Genevieve the night of June 16 and took off at mid-day the next day, after taking a look around town and doing some emergency repairs on her equipment.

“I’m paddling to bring awareness to people who struggle with chronic pain and chronic conditions,” she said. “I have both rheumatoid arthritis and scleroderma.”

Scleroderma is an autoimmune disease that affects the skin and some internal organs of the body. The body’s immune system damages normal, healthy tissues and replaces them with scar tissue, causing thickening and tightening of the skin.

Martin, who lives in Kansas City currently, but owns a home in Michigan, has tried tackling the Great Lakes in the past.

“The plan in 2017  was to paddle all five of the great lakes,” Martin said. “I ended up circumnavigating the three largest, Lake Superior Lake Huron and Lake Michigan, and then I was able to take the river systems to get to Lake Eerie and I did the south shore of Eerie, walked my boat around Niagara Falls, did a quarter of Lake Ontario. The plan was to do the three big ones first and then to do a circle-eight around the two little ones. Then the snow and ice moved in and I had to stop. Then the plan last year was to go back and try again, and the COVID stopped that within four weeks.”

This year an even loftier goal is being pursued.

“If I can set a female speed record, then I want to inspire other people to get up and keep living their life and not to give up and not to stay home,” Martin said. “Life is too short. Even if you’re hurting, it’s better to be out, doing what you love than to be shut up inside your house and never leave your home.”

The idea that painful conditions can be overcome is much more important to Martin than the record, itself.

“The message is very important to me,” she said.

She hit the mighty river at its headwaters on May 17 and has been averaging about 30 to 40 miles per day.

Her jaunt leading to Ste. Genevieve was her longest one, 65 miles, thanks in part to the increased current south of the influx of the Missouri River.

“It definitely will help.”

However, passing through St. Louis was traumatic and exhausting for Martin.

“The only bad thing about it is the barge traffic,” she said. “Up to yesterday, the channel markers were very clear; you knew exactly where the channel was and when there’s no barges, I would paddle in the channel. When I’d see a barge, I’d  pull off and paddle 20 or 30  feet off the channel. It was very non-stressful.

“Yesterday I was completely stressed and frazzled because it’s not very clearly marked and there’s more barge traffic. It’s hard to tell where the channel is and where they’ll be going. Especially in St. Louis, I had a bunch of barges blaring their horns at me. I’d be trying to head off the right side and somebody was blaring their horn, so I’d think ‘OK, I’ll go to the other side,’ then a barge over there is blaring its horn at me and I’m just frazzled. I’m like, ‘I’m going to get run over. Where do I go?’”