In one of their last regular meetings before the July 22-24 county fair, the Ste. Genevieve County Fair board went over a list of fair events and a list of things  still needed to be done before the fair begins, during the June 16 meeting.

The board also handed out its second scholarship and discussed insurance, which led to a heated exchange between board member Billy Klein and First District Commissioner Karen Stuppy.

MUCH TO DO BEFORE THE FAIR

With time dwindling before the fair, the board is holding a work day this weekend. Skaggs also encouraged members to drop by whenever they could, to help out. Among the needs were tractors to keep the race track in good repair.

General clean-up and cutting of weeds are also high on the list. Local 4-H members and other groups of youth are expected to help out on this.

“If anybody knows anybody with tractors we could use or who could come up and do some work during the county fair, we could use them,” Skaggs said.

Klein raised a question about some of the  ongoing needs, like bleacher work and building repairs.

Stuppy said that some items had been put off until the fair board’s insurance questions were cleared up. Klein argued that the fairgrounds are county property and that the needs should have been met, regardless.

“It needs to be done,” Klein said.

“It will be done,” Stuppy answered. She said that area contractors the commission has tried to contact are busy in a backlog of post-pandemic jobs.

She said that an electrical issue in one building was supposed to be done before the fair, but that projects involving the race track had been on hold until the insurance was ironed out.

Klein argued that when “everything was shut down in the United States” during the 2020 COVID-19 lock-down, it was the racing series at the fairgrounds that kept money coming into the county coffers.

“That racetrack kept the bills paid,” he said.

Klein then brought up the banning of alcohol sales at all events other than the fair. This was something the county’s insurance and the commission’s attorney had agreed needed to be done. Klein argued that this would severely cut into revenue derived from renting out the youth building for weddings and other events.

“So, now, you’re insurance says that if Kim [Gielow] rents this hall out for a wedding, they cannot have any alcohol here?” he asked. “Change your insurance.”

Stuppy said that was not possible. Klein refused to accept that.

Stuppy explained that they are covered by Midwest Public Risk, a pool of public entities throughout Missouri that has banded together to get the best possible protection and rates on insurance.

“They have government insurance, and our lawyer is also telling us that this is county property and we cannot sell alcohol,” she said. “My job, at the end of the day,  is to protect the county so that we are not sued because there is alcohol on these premises.”

She added that, “It’s black and white – no alcohol. I understand that people are probably not going to rent the hall because they want alcohol for a wedding. But, legally, we cannot have it.”

Gielow reported that the board’s new insurance, with the $1 million event coverage and $3 million aggregate coverage now required by state law, had gone into effect that day.

“She did say she didn’t understand why we didn’t have alcohol up here,” Gielow said, referring to Ellen Emmendorfer, the insurance broker who handled the fair board’s insurance.

Klein then expressed more frustration at the county commission seeming to get stricter on such issues this year.

“I don’t know what the hell happened in the last six or eight or 10 months,” he said. “I’ve only been on the fair board two years. I’m about done because of this … None of this was a big deal until six or eight months ago.”

He returned to the alcohol ban hurting revenue.

“Who’s going to pay the bills when the fair board has no money?” he asked. “You guys are.”

Stuppy agreed that  expenses like electricity and repairs would fall back on the county.

“I’m not going to get into an argument with you,” Stuppy said. “We  will not. We have the proper insurance with Midwest Public Risk, which carries the entire county.”

She noted that “They cover county governments.”

Eva Oberle of Valle Catholic High School, received the second of two fair board scholarships.  She was presented with a check during the meeting.

Skaggs noted that the board’s scholarship fund are being boosted by a Herald subscription drive, during which a portion of new or renewed subscriptions go to the fair board for that purpose. 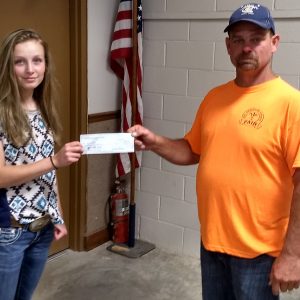