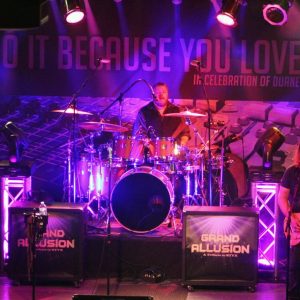 They have performed along side major country artists, from opening shows with the likes of Doug Stone, Daryle Singletary and John Denver.

“As for myself, this all started when my wife Suzy and other people were telling me that I looked and sounded like Alan Jackson whenever I performed,” Campbell told the Herald in 2020. “So I was approached about doing a tribute show and, to our amazement, the show took off.”

Jackson, the inspiration for the band, had his first big hit early in 1990 with “Here in the Real World.” Known for blending traditional honky-tonk and mainstream country pop sounds, Jackson has such hits as “Chattahoochee,” “Livin On Love,” and “Remember When.”

Campbell and his crew strive to replicate that sound and concert experience.

Last Friday, popular Styx tribute band Grand Allusion rocked the Orris with such Styx hits as “Come Sail Away,” “Mr. Roboto,” “Too Much Time on My Hands” and “Lady.”