Where would Hoog continue his basketball career on the college level?

The answer: Missouri University of Science and Technology.

“I think it’s a good fit for Carter,” said Valle Catholic head coach Tyler Search. “He’s worked hard to get where he’s at. No kid deserves this more than him. He’s put in the time and effort in the sport.” 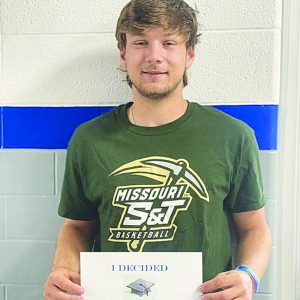 The Miners will be looking to improve under head coach Bill Walker, coming off a 4-16 season.

Hoog said he’s very appreciative of getting a shot to play at the Division II level.

“It’s awesome,” Hoog said. “I am so glad that I received this opportunity from the coach. Everyone around me has been supportive of the decision. I am super stoked to continue playing the game I love.”

“He’s a great combo guard,” Search said of Hoog. “He can do a little bit of everything well, handle the ball, shoot. And his leadership skills are polished.”

Missouri S&T should be familiar to local sports fans since that’s where former Ste. Genevieve High School athlete Avery Reed plays volleyball as an outside hitter.

Hoog (6-foot-2, 200 pounds) has graduated from Valle Catholic as the school’s all-time scoring leader with 1,747 points — surpassing Bryan Meyer and even his own father, Jeremy, along the way.

Carter was named the Warriors’ team most valuable player during the recent Sports Awards Recognition Night at the Bishop DuBourg Centre on May 26.