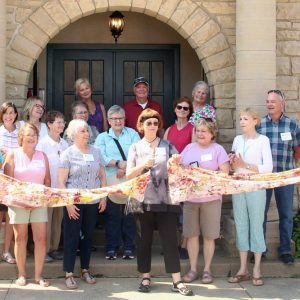 Shortly before the annual French Heritage Festival officially opened, a small crowd gathered in front of the new Sainte Genevieve Art Center and Art Museum for its ribbon-cutting ceremony.

Bach tied the structure’s 1933 opening with the present day.

“We find it very appropriate that when the building first opened on October of 1933, it featured an art exhibit by members of the Ste. Genevieve Art Colony,” she said. “However, the formal dedication wasn’t held until August, 1935, in conjunction with the town’s Bicentennial Celebration, some 22 months later.

“We are unintentionally following that precedent.  The very first art exhibit by the Art Guild in this building was prior to renovation in August of 2019, and our dedication was repeatedly postponed until today, also 22 months after the first exhibit.

“We are very grateful that in August 2019, the County of Ste. Genevieve granted a lease to the Sainte Genevieve Art Guild to create an Art Center and Art Museum to bring art to the public,” Bach said. “The County made essential repairs to the structure, and the Art Guild, with the help of  many volunteers, funds from generous donors and a grant from the Ste. Genevieve County Community Foundation, completed the remaining upgrades to create the renovated building you see today.”