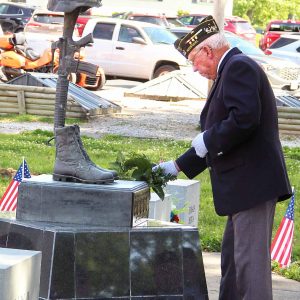 The day before, members of the Lt. Col. J. Felix St. James Camp No. 326 of the Sons of Union Veterans of the Civil War (SUVCW) held a Decoration Day ceremony in the St. Mary Cemetery, St. Mary, MO, honoring Union and also Confederate dead buried in the cemetery.

SUVCW member Bob Mueller gave some history of Dedication Day to the crowd attending the event.

A year after the cessation of the Civil War, Dr. Benjamin Stephenson of Decatur, Illinois founded an organization known Grand Army of the Republic (GAR). This was the first major military fraternal organization in the United States, and it was open to Civil War veterans of the Union Army, US Navy, US Marines, and the Revenue Cutter Service. 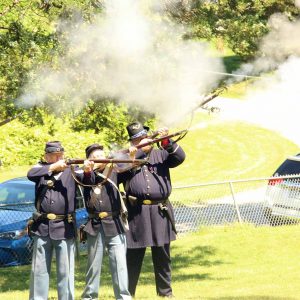 One of the GAR’s first initiatives was the establishment of an annual day to honor those who had lost their lives during the Civil War. On May 5, 1868, General John A. Logan of Murphysboro, Illinois and then commander in chief of the GAR, issued Order No. 11, which designated May 30 each year a holiday.