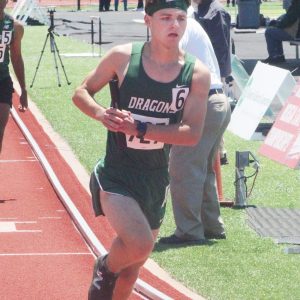 “Devin has been a true leader for all of the distance runners,” Ste. Genevieve head boys’ track and field coach Corey Samples said in a telephone conversation with the Herald.

Samples said all of the other athletes have looked up to Devin St. Clair, which in turn has served as a means of motivation for the Dragons.

St. Clair said he looked at several options for university-level running before ultimately deciding on MAC.

“I eventually decided to go to MAC because I think it’s a good program,” St. Clair said. “I will be able to use my A-plus designation, receive free college and join the track team.”

Another reason why he chose to run for the Cardinals was to run for Steve Davis, the former Potosi mentor who was named NJCAA Division III Coach of the Year in cross country last November.

“He knows how to show kids how to run really fast,” St. Clair said.