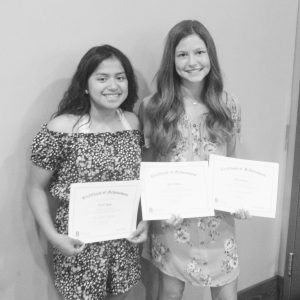 Players from both Ste. Genevieve and Valle Catholic were recently celebrated with postseason honors from the Mineral Area Activities Association — as well as all-region and all-district accolades.

“It looks good for the girls on the resume,” said Ste. Genevieve softball coach Russell Toombs. “They all worked hard. These awards are about them.”

Catcher Nicole Gegg and Weiler were honored during the Valle sports recognition night on Wednesday, May 26, at the DuBourg Centre.

“Both of these girls are very hard workers, and have dedicated themselves to make Valle softball successful,” Basler said.

Weiler posted a .406 batting average — with 17 hits, six doubles, three triples and one home run. She scored 21 times and recorded 23 stolen bases in a fine season for the Warriors (10-15 record).

Ste. Genevieve’s Brittney Kreitler has graduated as one of the most decorated players in school history.

Kreitler, who will continue her softball career at nearby Mineral Area College, recorded a .425 batting average, which was third-best on the Dragons

However, Kreitler provided her team with its highest on-base-plus-slugging mark (1.215), with 37 hits,  a new school record for doubles in a season with 19, three triples, 37 RBI and 33 runs scored.

Kreitler was first-team all-conference, all-district and all-region. She also served as a spot pitcher, throwing in 15 innings over the course of four games.

Isabel Basler was the Dragons’ leading hitter in terms of batting average at (.444) and she scored 37 runs.

A Win For Sam