That has a nice ring to it, and that’s what you can call the Ste. Genevieve High School girls’ track and field team.

The Dragons claimed the Missouri State High School Activities Association Class 3 state title with 38 points — one point better than Blair Oaks — at Adkins Stadium on May 29. 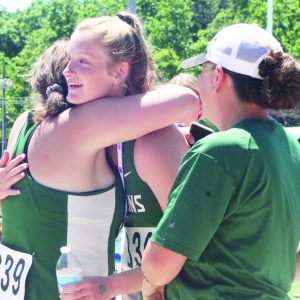 This marks the first state girls’ track and field title since 2013, when Brian Jett was head coach and current Puma running star Taylor Werner was part of the squad.

Huck said winning state was extra special since Ste. Genevieve is her alma mater, too, graduating in 2005. She was a multi-sport performer for the Dragons.

After claiming the state championship, Ste. Genevieve received an escort from volunteer fire department and law enforcement personnel back to the high school.

Activities director Dr. Jeff Nix (who coached track himself at one point) and a throng of supporters greeted the team upon arrival, Huck reported.

“Every point counted,” Huck said. “I knew we had to play catch up, but I was confident with Megan and Maci in the hurdles and Marysa in the javelin.”

PATH TO A TITLE

Southern Boone County bolted out of the gate with 18 points in the 3,200-meter run thanks to Alexandria Volkert (11 minutes, 18.03 seconds) and teammate Evan Mauney (11:18.40). However, the Eagles stalled out at 33 points, and finished third.

Blair Oaks burst from back in the team standings to score the full 10 points in the 4×400-meter relay, the foursome of Kaelin Forck, Ansley Casey, Payton Mitchell and Emily Sporleder clocking in with a gold-medal time of 4:08.91.

However, Ste. Genevieve made its point — with an eighth-place finish in the same event — and that’s what gave the Dragons the championship.

The Dragon foursome of Flieg, Wehner, Reynolds and Aubuchon recorded a time of 4:18.86, nearly six-tenths of a second faster than Trenton.

Wehner, who earned the right to be part of the 4×400 relay through plenty of sweat equity during the season, ran about a 67-second split to help the team get that eighth-place finish.

At the state meet this year, and thanks to COVID-19 (coronavirus) pandemic concerns, the format for relays finals featured the top-16 teams from four sectional competitions running two heats.

Admittedly, the Ste. Genevieve 4×400 squad had some help along the way. Odessa was disqualified for a false start, and Montgomery County’s quartet dropped the baton during the second exchange.

Sometimes it pays to be good, sometimes it also pays to have fortune shine upon you.