The Ste. Genevieve High School softball team established new school record for wins in a season with 16 during the 2021 campaign.

Those accomplishments were celebrated on Wednesday, May 26, at the Ste. Genevieve R-II Performing Arts Center on the second of two spring sports recognition nights.

The Dragon boys’ and girls’ track and field programs, and boys’ golf, had their celebration on Tuesday, May 25 — complete with a story in the June 2 edition of the Ste. Genevieve Herald.

“We certainly had a rollercoaster type of season with learning experiences, and some great, quality wins along the way,” said Ste. Genevieve head baseball coach Michael McDaniel. 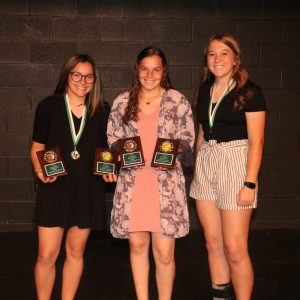 “There were times when we showcased the potential of our team, and the possible, positive outcome if we could play consistently,” McDaniel added. “Overall, I’m extremely proud of the way our guys kept to the grind.”

Ste. Genevieve baseball went 12-16, but there were some impressive highlights — including a 9-6 victory over Class 6 District 1 runner-up Jackson. The Dragons also topped Class 5 schools Sikeston and DeSoto.

The Dragons’ schedule was tough, which included a pair of games against the Homeschool World Series champion St. Louis Patriots, and three games against Class 4 District 2 champion Valle Catholic.

Ste. Genevieve beat Valle Catholic, 4-1, on May 6 during the Mineral Area Activities Association tournament. But, the Warriors turned out and topped the Dragons, 9-1, for the district title 12 days later.

Zach Boyer earned the most awards at recognition night, winning most valuable player, offensive player of the year and outstanding pitcher.

Zach won so many awards that cousin and classmate Aiden Boyer held one of his awards after the event.

Zach Boyer provided the Dragons with their most formidable slash line of the season at .355/.505/.566. A slash line is the threefold combination of batting average, on-base percentage and slugging mark.

Boyer also threw the most innings for the Dragons (45.0). He started nine games, and finished with a 4-3 record, 4.04 earned-run average and a team-leading 37 strikeouts.

Senior Payton Matthews was given the defensive player of the year award.

The athletic Matthews, a senior, tracked down plenty of fly balls as the Dragons’ main centerfielder.

Catcher Hunter Lorance, a senior who was not in attendance at awards night, claimed the “Dirty Uniform” award as the hardest working player on the team.