Thirty-five Valle Catholic High School students turned their tassels during their graduation ceremony on Thursday, May 13.

Valle Catholic principal Greg Miller related graduation to the first letter of Paul to the Corinthians, mainly focusing on Chapters 11, 12 and 13. 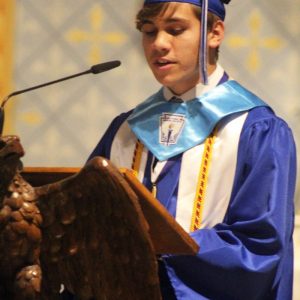 Words continue, with a mirror used as a prop, and “these three remain: faith, hope and love. But the greatest of these is love.”

Miller explained to the graduating class that, “The world needs warriors.” And listen to God’s voice.

He discussed the students attending school during an unsettling “pandemic madness,” which has featured shortages ranging from sanitary products to computer chips.

“We have argued and we have complained, but the faculty has stood by us,” Shuh noted.

She also said classmates have been there for her, with a “shoulder to cry on.”

Paraphrasing, Shuh said now is the time to push the “reset” button and begin the next journey. 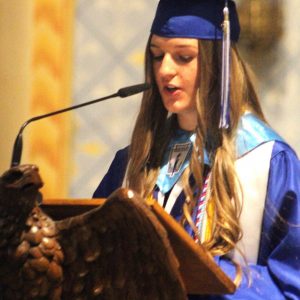 Shuh will continue her education at St. Louis University, majoring in health sciences on the pre-med track.

Valedictorian Josh Hoog noted that although he took a public speaking course, he was still “nervous” at the podium.

Josh credited his mother, Michelle Hoog, as his go-to-person, and he asked his father, Robert, to stand up. While Robert Hoog was standing, the audience gave him a round of applause.

Hoog urged his classmates to “stand out from the crowd.” He plans on attending Missouri University of Science and Technology to study aerospace engineering.